Home
Blog
Pull-Ups vs Chin-Ups | What’s The Big Difference In Each?

Pull-ups vs chin-ups, which is better to incorporate into your workout?

Well, often the topic of discussion is to argue which one is the superior exercise, and although at face value these exercises do share striking similarities, their intended use serves a different purpose that varies in a couple of ways.

They each have their own set of noteworthy distinctions, most notably the grip used and the muscles that are built, which are important factors to take into consideration.

As such, the decision-making process should be based on what your intended goal is and what you hope to accomplish by incorporating said exercise.

To properly do so, you need to have a clear understanding of what makes each variation unique, and for that reason, we’ll be delving into where they differ and whether one is ultimately a better choice for you. 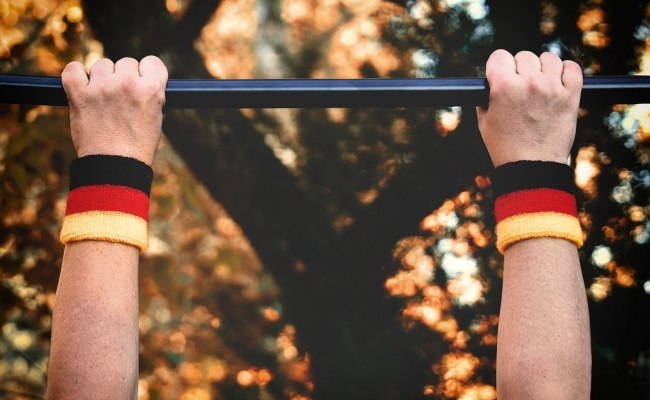 Disclosure: This post may contain affiliate links. If you click through and make a purchase, I’ll earn a commission at no additional cost to you. Read my full disclosure here.

The Main Difference Between Pull-Ups and Chin-Ups

There are two main areas where pullups and chin-ups are easily distinguishable, and that is in the form used and the muscle activation of certain muscles.

Between the two exercises, the form used throughout is similar but deviates in the grip used and the spread of the grip on the bar.

Although these two factors can be seen as relatively small adjustments in a mostly comparable set of vertical pulling movements, they make a world of difference.

Aside from these two, I’ll also mention a third type of grip:

Now, let’s take a closer look at the effects of using each grip, while also touching on the impact that the width at which use each grip has. 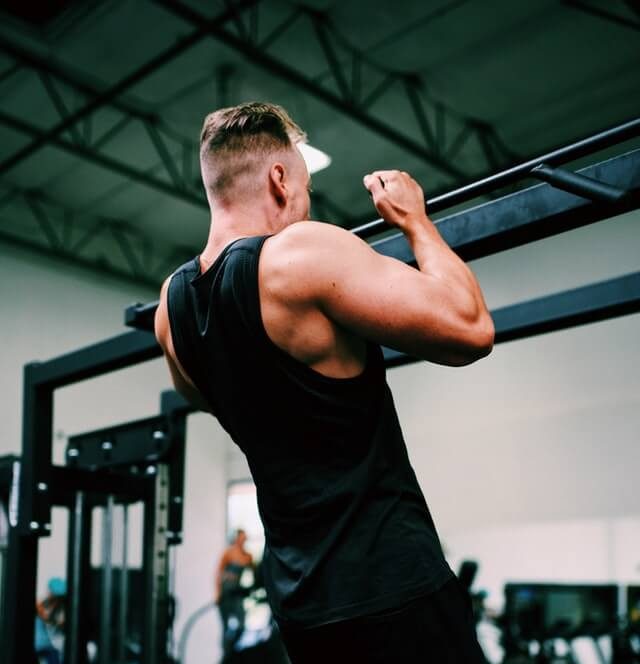 Let’s start with the easiest variation; when it comes to using the neutral-grip, whether you call it neutral-grip pull-ups or neutral-gip chin-ups, this hand placement maintains the forearm in a neutral position halfway between pronation and supination.

The benefit here is that you manage to achieve the greatest force recruitment by involving both the brachialis and brachioradialis, which are two other muscles found near the biceps that are responsible for the flexion of the elbow.

This is also in large part why for many people the neutral-grip can seem like an easier alternative to performing regular pullups or chin-ups.

Another fact is that for pulling exercises, more people tend to have more dominant strength in the arms than in the back.

This makes the neutral-grip an advantageous choice for maximizing the amount of support you receive from your biceps, brachialis, brachioradialis, and lats, without having to undergo supination or pronation.

It’s especially a good choice if you’ve had shoulder issues in the past as it allows for a more natural rotational motion at the joints, minimizing the amount of stress placed on the shoulders and wrists out of the three variations.

With the neutral-grip motion, you undergo shoulder extension since the elbows are bending down and back in front of the body. 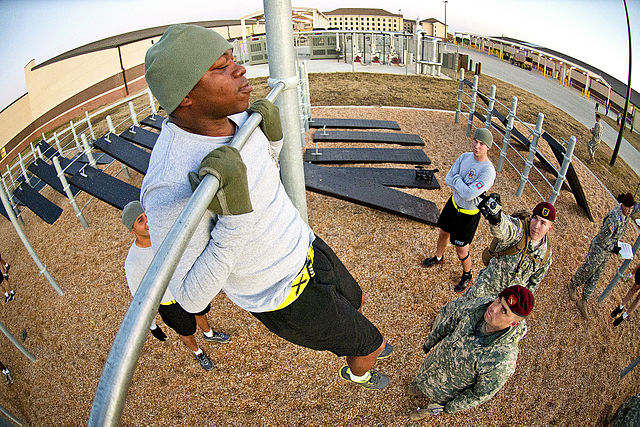 Chin-ups largely focus on the biceps

Going into another easy variation, chin-ups, which use a shoulder-width grip or narrow-grip, put a great emphasis on the biceps due to the hand placement being used.

Since one of the bicep’s primary functions is forearm supination, when your hands are placed in a supinated or underhand position, that puts the biceps in a mechanically advantageous position to produce greater force.

More emphasis is placed on the biceps while performing chin-ups, especially when using a more narrow grip, thereby taking the total work required and directing more of it towards the biceps and pecs than to the lats.

For that reason, chin-ups tend to be easy to perform since they allow you to rely more on the biceps while still using the lats.

The trade-off is that by incorporating the biceps and pecs to take on most of the load, the lats become nowhere near as defined since you lose some of that engagement and isolation you would receive with the pullup.

Looking at the width of the grip, a narrow grip will lead to greater pec activation. However, the standard grip which is slightly outside shoulder-width is still the best route considering that you already get plenty of pec involvement from the standard grip.

Here you’re again undergoing shoulder extension as the elbows are coming down and back in front of the torso. 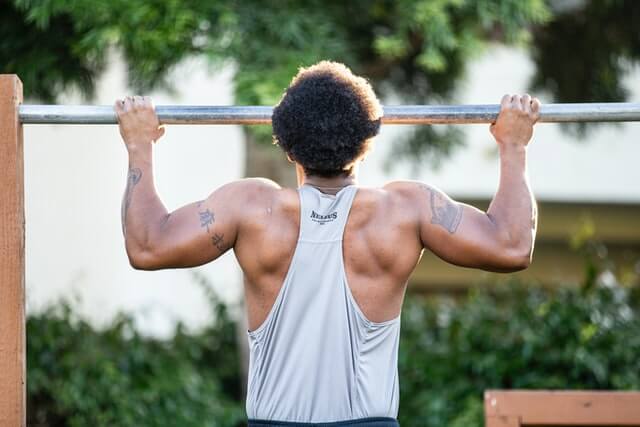 Pullups force the lats to work

As previously mentioned, the pull-up uses an overhand grip that is spread shoulder-width apart or wider.

In the case of when you have a wide-grip, which is when your hands are separated much farther than the shoulders, the common consensus is that this type of pull-up puts a much greater emphasis on the recruitment of your latissimus dorsi or lats. 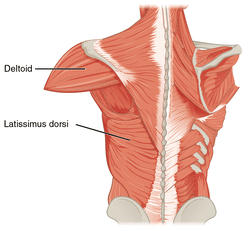 Since your arms are kept wide, this places the biceps in a mechanically disadvantaged position, thereby forcing the lats to work harder and overcompensate to complete the movement.

While that is true, a wider grip isn’t necessarily the better choice; in fact, the standard grip which is just outside shoulder-width has the greatest involvement of the pecks while still maintaining a large range of motion, making it the more ideal grip width for most people.

The hands are also pronated in the pull-up position, which naturally deducts from the biceps ability to undergo supination.

All of these factors help isolate the lats and build them up, leading to a wider torso and impressive physique.

For basketball players, this can be especially beneficial for becoming a better defender by getting wider and covering more ground to box out, post up, and even block a basketball shot.

When holding onto the bar using an overhand grip, you have the improved ability to perform adduction at the shoulder joint, which is where the elbows are coming down and back from the sides.

Compared to a close-grip chin-up, there’s a greater demand placed on the body by the adduction taking place which forces your back to get involved, something that isn’t nearly as focused on when the elbows are front and center to the body.

There is also a lot less elbow flexion occurring when performing a full range-of-motion pull-up relative to a standard chin-up.

A benefit of using these two bodyweight exercises is that they’re a great way to gauge your current level of fitness with regards to your relative strength, flexibility, and more; pull-ups are a particularly common test exercise.

If you find pullups and chin-ups hard to carry out, then there’s likely something you need to fix. This type of feedback is useful as it notifies you whether you need to get in check with your nutrition or change your current training regimen. 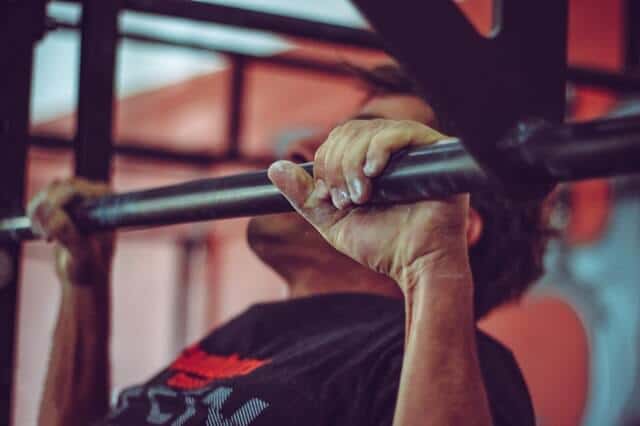 Can you make it above the bar?

Aside from being a source of advice, pullups and chin-ups are fantastic options for building up muscle in the back and biceps.

For basketball players, pullups work particularly well at developing the back, shoulders, and wrists, all of which affect your ability to shoot a basketball.

Pull-Ups vs Chin-Ups – Which One is a Better Pick?

Irrespective of the grip you use, you’re still working on your arms, back, and shoulders, because the pulling movement throughout each variation is still much the same.

As far as which variation is the better pick, there isn’t a right or wrong answer, it all depends on your current level of fitness and what muscles you want to train.

Don’t think of one as being necessarily better than the other; they’re simply different methods of training the lats and biceps.

Pullups are a notoriously difficult bodyweight movement, as they provide an intense challenge regardless of strength levels.

Depending on your level of relative fitness, you may have a harder time performing this exercise, particularly if you’re a beginner.

The difficulty factor can seem rather high when you’re struggling to perform a single pull-up, let alone five, which is why you should follow a steady progression starting with the easiest variation and slowly working your way up as you build strength and increase your repetition range.

In this way, you can spend more time developing and maintaining proper form instead of depending on the momentum of the exercise to get you over the bar, which will prove to be important long-term.

In the case of people that are intermediate to advanced and have an easy time going over the bar, the goal is to now pick and choose your workouts to maximize the activation of specific muscles.

When it comes to choosing your hand placement, either underhand, overhand, or neutral, pick the one that’ll emphasize the muscle you’re trying to target the most.

One approach that seems to work well is swapping in between grips every so often to add variety to the workout, which is to say that you use pullups for a while, chin-ups for another while, neutral grip for another, and then repeat.

Chin-ups and pullups are for the most part safe exercises, especially when they’re used as a bodyweight exercise; once weights are incorporated, you want to take the standard precautions you would take with all other weight training exercises.

This includes using proper form and having someone else spot you during a workout.

Aside from using weights, other common problems can definitely arise, most notably in the form you use. 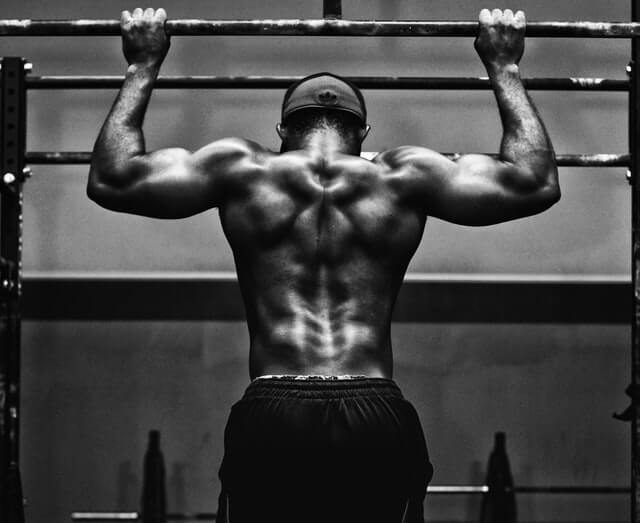 Pull-up variation behind the neck

Whether it be a pull-up or chin-up, trying to do it behind the neck can lead to devastating problems in the shoulders down the line. You can go for a long time without suffering any issues, but many complications can progressively develop.

That isn’t to say you can’t use this variation; I’d instead recommend you measure the risk of putting undue stress on the shoulders and neck with the rewards you reap and determine whether it’s worth using. Personally, I advise opting for a safer variation.

Another issue is using too wide of a pull-up grip, which doesn’t lead to wider lats but rather a reduced range of motion and a higher risk of incurring shoulder injuries. This seems to fall in line with the common trap of doing what you don’t know.

Similarly, kipping pull-ups can quickly become problematic when you start flailing around and kicking like a maniac, which is why regular, strict motion is generally better to use.

Aside from all that, the comfort of each grip is reliant on how you feel when performing each motion; you may find pull-ups more your style, even if chin-ups place less stress on the shoulders, and using the neutral grip is overall safer.

Experiment with each variation to see which one suits you the best.

Each of these variations prioritizes certain muscle groups depending on the one you choose to go with, but none of them is flat out the best choice.

They each serve a different purpose, whether it be to work the biceps or lats; depending on your preference you may want to go with one variation in specific or swap in between them every so often.

Regardless, because the motion remains much the same, you’re still working the arms, back, and shoulders, and as such, they all make a great addition, either in your actual workout or as a part of your warm-up.

It all depends on how you put the exercises together and use them that will determine the results you get. 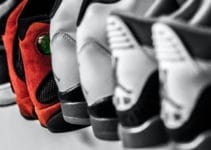 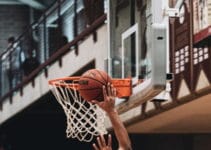 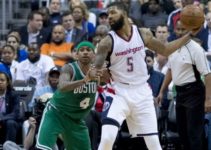 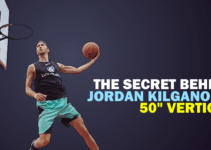 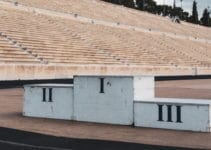